“Any minute now the world streams over its border” (Ot-ot gist zikh shoyn iber di velt bizn rand). So writes Soviet Yiddish poet Peretz Markish, a single resonant line among the hundreds in his eighty-page poem The Man of Forty (Der fertsikyeriker man), which his wife smuggled out of Stalinist Russia in a potato sack in 1949. Had she not done so it would surely have been seized by Stalin’s agents, who were moments from arresting the dissident poet when she departed.

As New York City became the epicenter of the Coronavirus outbreak, observers noted that cities have long been viewed as bastions of disease. In particular, as the industrial revolution led to rapid urbanization in the nineteenth century reformers sought ways to mitigate the public health problems created by overcrowded living conditions and lack of sanitation. Among the questions they asked: how could urban housing for the working class be improved and who was responsible for improving it? 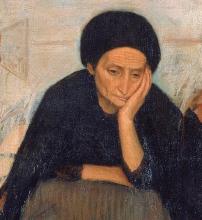 To kick off a new contributor conversations series here on the JQR blog, Anne Albert asked contributor Ellie Schainker a few questions about her essay and its implications.
Category
Jewish Quarterly Review