"Do not be saddened or troubled, good sister. Your brother will die today as a good Jew." These are the words reportedly spoken by a fourteenth-century mendicant friar, just before taking his own life. He had declared his conversion to Judaism, and despite his sister’s tearful entreaties, he chose a public and violent death over forcible return to his order. One Avraham ben Avraham Avinu, whose dramatic and literally iconoclastic antics made him the subject of at least three contemporary reports, did the same.

What’s Steven Spielberg Got to Do with Nineteenth-Century Jewish Literature? 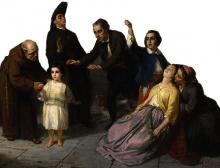