The Convert and the Concubine: A Story of Love, Islam, and Halakhic Flexibility 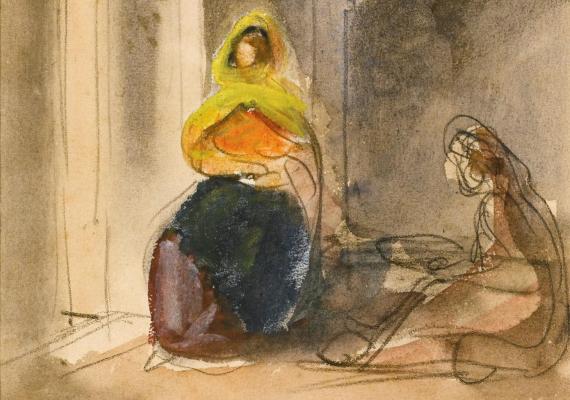 This year at the Katz Center the fellows have spoken about how little research has been conducted on modern Jewish legal sources from Islamic lands. With this in mind, I’m presenting one such source to show the promise that legal texts have for shedding light on both social and intellectual history.

The text below* is a legal question sent to Rabbi Raphael Berdugo (1747–1821) of Meknes (Morocco), a prominent rabbinic authority, and his response. The question deals with a particularly delicate case concerning the marriage of an outwardly Muslim crypto-Jew. We know of this individual and his wife from no other sources, since their precarious existence depended on great secrecy. Each section of the responsum is followed by my own explanatory commentary.

Question:
Reuben had been married to Dinah for several years when he became defiled [i.e., converted to Islam], exchanging good for evil. Despite this, however, he still safeguarded himself from all evil things—he neither ate their bread nor drank from their cups. Moreover, he remained married to his wife Dinah who observed with him all the laws of menstrual and post-partum purity, as do the daughters of Israel.

Commentary: Reuben and Dinah (pseudonyms for a Jewish husband and wife) remained married even after Reuben’s conversion to Islam, an arrangement permitted by Islamic law. We don’t know why or under what circumstances Reuben converted to Islam, but it is clear that, despite the conversion, he kept himself apart from Muslims by avoiding eating with them and secretly observing Jewish law. By continuing to practice Judaism, Reuben placed himself in a risky position, because Islamic law regarded conversions to Islam as permanent and imposed the death penalty on converts who reverted to their former religion.

Commentary: The couple fought and Reuben divorced Dinah. The consequences of the divorce for her were serious. Life was difficult for an unattached woman in this period, and it therefore comes as no surprise that she attempted to remarry. Yet, despite the engagement, the new marriage was never consummated. Dinah was divorced and left in a situation of extreme precariousness, one that is compared to the biblical Naomi’s bereavement of her two sons.

Question, continued:
Then came the day when Reuben wanted to take back his former wife, the aforementioned Dinah, because he felt  that the gates of light had been locked  for him and that all of the world was dark since the day he divorced his wife. He wandered the wandering of a man [Babylonian Talmud, Sanhedrin 26a: “The wandering of a man is more difficult than that of a woman”], and remained wandering, finding no rest for his feet. Soon he would he would stumble, falling in with a nashgaz [a menstrually-impure woman, bondmaiden, non-Jew, or prostitute], and all his efforts and safeguarding of himself would be for nought.

He was unable to marry anyone, Jew or non-Jew. Any wife other than Dinah, who was already known to all the non-Jews and Jews as having been his wife while he was still Jewish, would be a danger to all the world. Were he to marry another woman, there is no doubt that they [the Muslims] would raise an outcry against him against which there is no remedy…

Inform us, oh teacher, what the judgement is for this man, weak and thin. Perhaps an Israelite soul will be saved if he is able to make her his concubine without a marriage contract (ketubah) and without a marriage ceremony (kiddushin), because to reunite with her by means of a marriage contract and ceremony is against the law since scripture says: “Her first husband, [who divorced her, is not allowed to marry her again after she has been defiled” (Deuteronomy 24: 4)].

Commentary: This part of the question describes the legal crisis in which Reuben and Dinah find themselves. Reuben wants to remarry Dinah, but Jewish and Islamic law render opposing judgments on this issue. Jewish law forbids a man from remarrying his ex-wife if she has married someone else in the interim. In contrast, Islamic law allows a man to remarry his ex-wife only if she has married someone else in the interim. Thus, to the extent that Reuben is Jewish, he cannot remarry Dinah. Abandonment of Judaism must therefore have been a very great temptation for this couple given that only Islamic law facilitated their reunification.

The author of the question to Rabbi Berdugo has additional concerns. If Reuben does not marry Dinah, two undesirable outcomes are possible. If he were to marry a Jewish woman, he would place her in danger of converting to Islam, and would perhaps add to doubts among Muslims regarding the sincerity of his conversion. If he instead sought non-Jewish sexual companionship, he would violate the Jewish prohibition against cohabiting with a non-Jewish woman. All potential solutions to Reuben’s problem are thus Jewishly and socially problematic, and there is also the concern that Dinah lacks the protection that comes from family.

Answer
Berdugo’s answer is long and will be given here only in summary. First, he emphasizes the explicit scriptural prohibition on the remarriage of such a couple: “Her first husband, who divorced her, is not allowed to marry her again after she has been defiled” (Deuteronomy 24:4). The fact that Dinah’s second marriage was not consummated does not offer a loophole. Reuben’s distressing circumstances and the imminent danger of his cohabitation with a non-Jewish woman does, however, impact Berdugo’s decision. He values Reuben’s efforts at “safeguarding himself” and is concerned that if nothing is done, “a soul will be lost from Israel.” Quoting the Talmud, Berdugo notes that the prohibition of remarriage only applies to formal remarriage (kiddushin). A loophole is thus opened. Reuben may take his wife back as a concubine (pilegesh), an institution which, although prohibited by most rabbinic authorities, was permitted by some medieval Andalusian rabbis. Any concerns about violating rabbinic prohibitions of concubinage, Berdugo says, are outweighed by the value of saving a Jewish soul and he thus allows the couple to be reunited.

Conclusions
Berdugo’s solution was to reunite Reuben and Dinah in a sexual relationship that was not acknowledged as a marital one. The requirements of family law are sublimated to concerns about practical safety and family happiness. To accomplish this, Berdugo reached back into his own Jewish Andalusian heritage to search for a legal precedent that might justify his own sense of justice, and found it in the Andalusian Jewish practice of concubinage. Through the application of this obscure and unlikely precedent, Berdugo created a halakhic framework that ensured that this vulnerable Jewish couple could provide companionship and solace to one another amid the clashing laws of Judaism and Islam.
*Source: Raphael Berdugo, Mishpatim Yesharim (Krakow, 1891), no. 170.