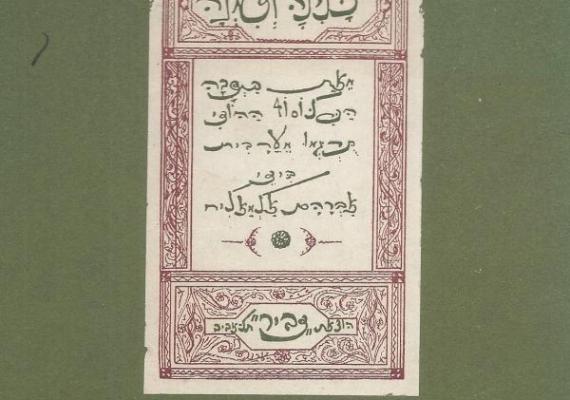 This blog post is part of a series focused on the research of current fellows. In this edition, Steven Weitzman sits down with Yuval Evri to explore his research project, "Between Partitions and Translations: Arab-Jewish Cultural Visions at the Turn of the Twentieth Century."

Steven P. Weitzman (SPW): Your work is remarkable for the way it is able to move between Jewish and Palestinian or Arabic culture in the early twentieth century. Can you share with us what led you to your interest?

Yuval Evri (YE): The turn of the twentieth century in Palestine is usually portrayed from a nationalist perspective in historical literature. It is perceived as a period dominated by national, ethnic, and religious separations; as a time of emerging national movements—Zionist and Palestinian—as empires waned; and as the starting point of the Israeli-Palestinian national conflict. The dominant scholarly literature focuses mainly on the creation of separate and hostile national entities, emphasizing the partition mechanisms that created cultural, social, and political boundaries between Jews and Arabs. In this context, partitions apply not only to division of the land but also to the separation of disciplines, traditions, histories, and languages: between Hebrew and Arabic, Judaism and Islam, Jewishness and Arabness, East and West, Israel and Palestine. 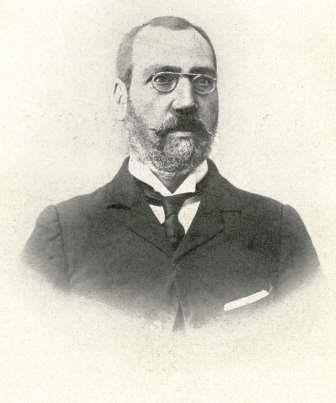 I wanted to propose a different approach towards this dramatic era, focusing on the Arab-Jewish perspective. By exploring the cultural activities of a group of Arab-Jewish intellectuals in early twentieth-century Palestine, my work seeks not only to reveal forgotten voices, but also to open up new political and cultural horizons and opportunities that transcend existing national and disciplinary divisions.

Focusing on the Arab-Jewish perspective opens new horizons beyond simply revealing "missing stories" or "missing figures" in modern Jewish history. It has enabled me to engage the history of Israel/Palestine through the lens of the contact zones and borderland, and with historical events from multiple approaches and prisms, drawing on multiple geographies and loyalties. The approach can also challenge and problematize some of the basic assumptions, categorizations, and terminology that organize official (Jewish and Arab) historiographies. It destabilizes the clear-cut separations between Jews and Arabs; Hebrew and Arabic; Israel and the Middle East; West and East that are placed at the core of the official political and historical discourse. The Arab-Jewish perspective also challenges the imaginary geography which positions Jewish history mainly as an integral part of Europe and Western civilization while disassociating itself from the Middle East and the Arab world. It reveals a different set of geographies that position Jewish history also in the context of Middle Eastern history. Instead of imagining purified national territories and societies with clear border lines, an Arab-Jewish perspective draws a different map with thick borderlands which represent complexed and intertwined spatial connections, showing how the story of Jews and Arabs in Palestine is embedded in, shaped by, and reacts to complex historical contexts. Moreover, this approach enables us to downplay the dominance of the nationalistic elements in the story of Palestine during the mandate era and introduce new social and cultural dimensions such as: class, gender, language, cultural orientation, social status, geographical location, which usually cross the national boundary lines.

SPW: Can you tell us about the project you are here to advance at the Katz Center this semester?

YE: The research project that I am working on during my fellowship at the Katz Center focuses on the cultural visions and activities of a group of Arab-Jewish intellectuals in early twentieth-century Palestine. At the center of the cultural work of this group of intellectuals is a vision of a seemingly lost world: Islamic “al-Andalus” or “Sefarad” of the tenth–twelfth centuries. This was the famous “Golden Age” of Jewish intellectual life, the age of great thinkers and poets such as Maimonides, Moses Ibn-Ezra, and Yehuda Halevi, who were inextricably linked to Arabic poetry and Islamic philosophy while advancing the study of Jewish law and Hebrew philology and poetry. In light of this intertwined cultural heritage, the Arab-Jewish intellectuals in Palestine viewed their time as an “Andalusian moment” in which Jews and Muslims came together in a shared homeland, as they did in medieval Iberia before the expulsion. They tried to revive this medieval vision as a social and political platform for modern Jewish-Arab coexistence in Palestine.

The prominent members of this intellectual group were Yosef Meyouhas, Abraham Shalom Yahuda, David Yellin, Isaac Benjamin Yahuda, and Abraham Elmalih. Born in Palestine in the second half of the nineteenth century, they were part of a growing circle of native scholars whose intellectual activities encompassed ethnographic research, philology, translation, journalism, and education. During the late Ottoman Era, they were active members in both Hebrew and Arabic revival movements. While the increasing hostility between Jews and Arabs opened a linguistic breach between Hebrew and Arabic, they insisted on holding on to both languages, positioning themselves in the borderland between them, and using translation as a political and cultural tool. They published hundreds of essays, political commentaries, translations, short stories, and poems, mostly in local Hebrew and Arabic newspapers and journals, marking the first modern phenomenon of Arabic-Hebrew literary bilingualism since the great Arab-Jewish poets of medieval al-Andalus. Their perception of al-Andalus led to fierce disputes with leading European Jewish scholars over the interpretation and representation of the Andalusian Jewish "Golden Age." While European scholars emphasized Hebrew separatist elements, they emphasized its multilingual, translational, and interreligious aspects.

My research focuses on four of their major translational projects, all translations from Arabic to Hebrew: Yalde Arav(Children of Arabia), a collection of biblical tales from the Arab-Palestinian oral tradition by Yosef Meyouhas (1927); Mishle Arav (Tales of the Arabs), a comprehensive collection of Arabic proverbs by Isaac Benjamin Yahuda (1932); Kalila wa Dimna (Kalila and Dimna), a famous collection of animal fables that were translated from Sanskrit to Persian, Arabic, and Hebrew by Avraham Elmalih (1927); and Ha-Melekh Umar al Na’man u-Vanav (King Umar al Na’man and his Sons), a section from the Thousand and One Nights by David Yellin (1930).

These translations stand out because they do not belong to a uniform religious, national, geographic, or linguistic tradition. They traverse languages, time, space, and culture, providing unique case studies of translations without original written sources. They combine oral and written traditions, thus blurring distinctions between author and translator, original and copy. They present a unique linguistic mix of Hebrew and Arabic which challenges national distinctions, offering exceptional evidence of modern Hebrew-Arabic hybridity. These translations are not merely literary exercises; they embody an alternative political possibility of shared Hebrew-Arabic culture, against the mainstream Zionist separatist approach.

My research on these translations has three axes: (1) textual analysis, focusing on linguistic, structural, and thematic aspects that reflect the turbulent Palestinian politics of the 1920s and 1930s; (2) their public reception compared to other literary projects in Hebrew and Arabic circles; and (3) the broader political context and implications—the translation strategies, selection of texts, and the translators’ cultural and political motivations as stated in prefaces, interviews, and private correspondence.

SPW: Many of us think about the categories of "Jew" and "Arab" as very different categories of identity, even opposed categories. What has your research taught you about these categories and their relationship to each other?

YE: The dominant approach in the modern Jewish and Arab historiographies tends to emphasize the ruptures and divisions that divided the Jew and the Arab in the modern-national era. This binary historical perspective, and its distinction between Arabs and Jews as opposing identities, leaves no room for hybrid identities such as “Arab-Jewish,” and so overlooks the native Middle Eastern Jews of the period, who simultaneously embodied Arab and Jewish histories, traditions, and identities. The story of the Arab-Jews is largely ignored in the official national narratives, despite their deep involvement in the cultural and political movements of the time. When mentioned, they are usually portrayed as passive actors or bystanders who were led by mainstream forces.

In my work I try to suspend this monolithic and Eurocentric approach and to broaden the historical and geographical analytical scope to several centers and set of relations and contacts between Jews and Arabs in different political and cultural contexts. This broader framework opens pathways to discover new intellectual and cultural connections. My research at the last decade focuses on Arab-Jewish/Sephardi intellectuals during the turn of the twentieth century. Tracing their intellectual activities throughout several decades not only opens a door to a rich and diverse intellectual world, but also, and maybe more importantly, opens new horizons of political and cultural realities and opportunities beyond the existing political and disciplinary divisions.

One of the aims of my research project is to position Arab-Jewish thought at the forefront of scholarly discourse on the modern history of Palestine/Israel, highlighting options that were marginalized and forgotten. It also wants to restore an essential element of modern Hebrew and Arabic literatures—the first Hebrew-Arabic literary circle—which has been, and still is, overlooked in literary historiography.

More specifically, in the context of Sephardi/Mizrahi history, my work aims to transcend the existing disciplinary divisions that limit a Mizrahiness to a movement that is framed within the modern Jewish national project informed by Westernization and Europeanization. Instead, I place it within a landscape of multiple locations, loyalties, and collectives, embodying broad and complex spatial, cultural and historical contexts. 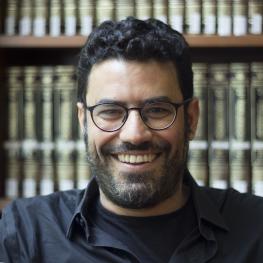