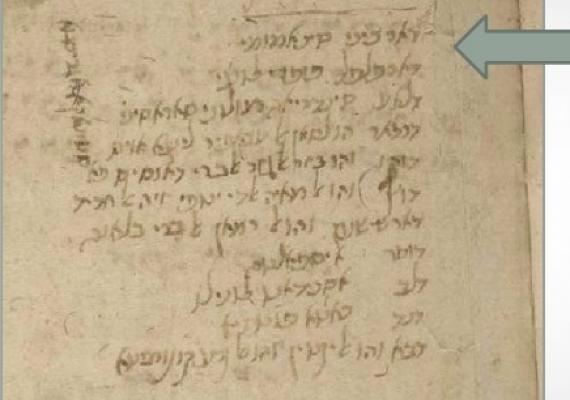 Reflections on the SIMS-Katz Center Partnership

In the fall of 2014 the Schoenberg Institute for Manuscript Studies (SIMS) at Penn’s Van Pelt Library acquired a fifteenth-century Sicilian medical miscellany (now UPenn MS Codex 1649) that stitched together a variety of texts, including three medical treatises written predominantly in Judaeo-Arabic with marginalia in Latin, Hebrew, and even Samaritan.

This on its own was enough.  Libraries collect important manuscripts, and make them available to research. But more could be done.

Tzvi Langermann, a past Katz Center fellow and Professor of Arabic at Bar-Ilan University, came immediately to mind. Who else on this earth controlled the requisite quiver of skills necessary to read this material? An eminent scholar of premodern science, medicine, and mathematics whose mastery of rabbinic thought, plus experience with manuscripts, made him ideal (nay miraculous). The Katz Center and SIMS together found the means to bring Langermann to Penn, and thus the manuscript catalyzed an institutional collaboration before its pages were even opened by the scholar.

Langermann agreed to take a break from his current research to spend two weeks with the document. At the end of his time, he shared some of the fruits of his study through a graduate seminar and a public lecture. He also taped a video Master Class in which his findings will be shared globally.

Since he was not trolling the UPenn MS Codex 1649 with any particular question in mind, he was as open to the object in all its facets—and aware of the ways the object outran even his analytical abilities.  The evening after his public lecture (September 3, 2015), not 24 hours before taping his master class, Langermann posted his PowerPoint slides from the lecture in an open forum on academia.edu.  The response was overwhelming. By the time the forum closed three weeks later, 141 people had participated, and nearly 1000 had viewed the PowerPoint (994 at the time of writing this; 9/24/15).

The forum participants were not focused on Langermann’s theses per se—on whether he was right or wrong—but on how best, together, they could make sense of the ancient text. Crowd-sourcing brought people with expertise in a vast array of subjects to bear on the document.  Indeed, within hours of its posting, one scholar questioned Langermann’s interpretation of a dating chronogram, causing Langermann to adjust—and improve—his work between sundown and sunrise.

Standard scholarly research agendas are, as often as not, anchored in an idea or set of ideas meant to reshape how we view the past. Evidence is adduced and ordered to make a new story, or construct a model through which to better comprehend human data.  Research is valued for its “contribution,” whose most perdurable metric is originality. Ideas that are both new and good are valuable commodities, tradable for promotions, invitations, students. A scholar’s relationship to her work is thus by necessity proprietary.

Object-driven research—research that takes as its beginning and end a particular artifact—invites a different dynamic. Since what is paramount is not a hypothesis to be asserted, tested, and defended, the artifact itself determines the agenda. The scholar’s ego can thus be transferred to the object and subordinate itself to the demands of an item which itself asks the questions needing answering. Seen this way, object-driven research is naturally and uncomplicatedly collaborative.

Outside of museums and libraries, object-driven research occupies a particular small quadrant of the scholarly landscape. And indeed the limitations imposed by an object are obvious. No one thing can tell us everything; an object’s meaning is constrained by space and time and function.  Still, an artifact’s mysteries are manifold. Since the object is by definition unique—original—scholarly desire can focus on it and not on the originality of insight. The very metaphorics suggested by the object-driven researcher are telling: the doctor trying to cure a mysterious malady; the general contractor; the sheriff gathering a posse; the impresario. How different these are from the monkish Casaubon, the solitary genius, the amasser of note cards, the analyst, the philosopher.

Collaborating experts are not only welcomed, but sought. If a paleographer is needed, then by all means get one—does DNA testing need to be done on the parchment? Who is the world expert on bindings? or watermarks? Who knows how to dissolve 300–year-old glue? Is there someone who can advise on Greek cardiology, Latin consonantal shifts, regional Portuguese dialects, botany? How about trade routes and weather patterns? Aragonese politics? The radical specificity of the artifact means that each expert in turn needs the others to do her job right. The object engenders love from all—it becomes their shared obsession.

Below I have chosen a few exchanges sparked by Langermann’s initial observations and findings. The full text of the academia.edu forum, including, among other things, a lively discussion of the color of arterial and venous blood, and debates over the color “yellow” can be found here.

The lecture that accompanied the slides can be viewed here.
For more on the manuscript in general click here. 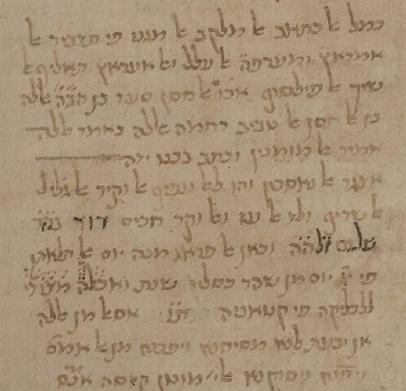 Nadia Vidro
Dear Professor Langermann, thank you for inviting me. I noticed that the date in the colophon does not work: 13 Kislev in 5216 was a Sunday, not Tuesday. Is the year of copying supported by some other evidence? It is hard to see on the slide, but could it be that not all letters in the date phrase are marked as numbers? There are two lines over the heh, and perhaps, it represents 5000. The initial vav and aleph are also not marked in the same way as the rest of the letters. If the one dot that can I see on the slide refers to aleph, the year would be 5205, and in it 13 Kislev was, indeed, a Tuesday.

Tzvi Langermann
Thank you, I admit that with all the other things I had to check, I simply copied the information that was on a previous cataloguing—a serious mistake in this business. The difference is not great, the manuscript is still mid-16th century, which is how it looks to be… but you are right in catching this, now I will have to go back and check again.

Justine Isserles
Dear Professor Langermann Thank you for inviting me to comment on your paper which I am sorry I missed! I do have the following comments: 1. I am not surprised by a Romance spelling of Hippocrates, especially ending with a ש. In fact it is a 'sin' and often interchangeable with a ס. I described a ms from the University Library in Geneva ( 14th c., paper, Sephardic script) which contains the Problemata Physica by Aristotle and there is a later hand at one point describing the contents as פרובלימיש דאריסטוטילש . Then at the end we find a colophon with the word spelled with a samekh. Linguistically speaking I have seen several variations in spelling of one word in several different contexts and the use of “sin” or “samekh” for the “s” sound is common. 2. I do not think that the writing of this text is the same as you find in the binding. It can only come from the same book if there is another textual unit with the same hand which you cna find on the binding cover. 3. I am fascinated by the glossary at the end, and am trying to decipher more words ( I am not as keen on Spehardic script as with Ashkenazic/ Italian or Provençal). I will let you know if and what I discover.... Thank you for sharing your research with me! Best wishes, Justine

Tzvi Langermann
thanks... I have never seen this spelling of hippocrates in an arabic text; people wrote names as they heard them, hence I tend to think that is the name was written with a shin, it was pronounced sh and not s; but I am more at home in medical theory than in this sort of thing 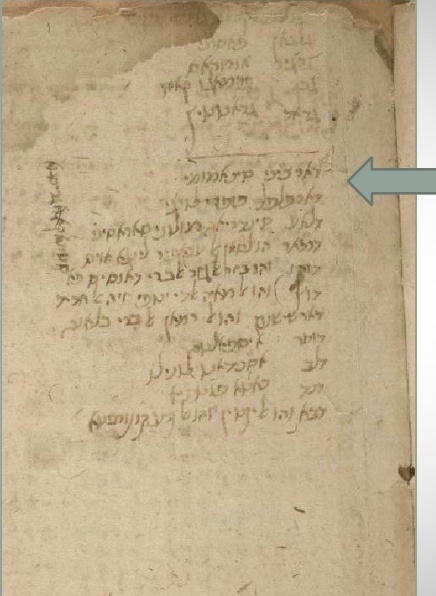 Tzvi Langermann
thank you...I just wanted to tell me audience about the way blank pages were used, and how interesting these names (written out in Hebrew letters, as they were heard) are to Romance philologists—of which I am not one

Igor Souza
For what it's worth, "piperis lorgi" is mentioned in the Pharmacopoea sive dispensatorium coloniensis, of Petrus Holtzemius (1627), p. 53. This might help further identification. "Cinamomo" in Portuguese can refer either to the spice or to the cinammon tree. The word may or may not have entered Portuguese from the Hebrew; there are different opinions. The earliest mention of it in Portuguese that I have run across dates to the 14th c. See A.A. Tavares, "Palavras Hebraicas e Hebraísmos na Língua Portuguese," Didaskalia 6 (1976), 105, 107 n16. There's an extended discussion on cinamomo by Garcia da Orta, "Colóquios dos Simples e das Drogas da Índia" (1563), which mentions Avicena and the Qanun in connection with the term.

Caroline Petit
Dear Tzvi, thank you so much for sharing this, and for inviting me to comment although I am not competent at all on Semitic texts and manuscripts! two small points: (1) I have seen other examples of Latin literal translations of names (or, important words in the text) in the margins of Arabic manuscripts, esp. Scorial. arab. 793, which contains Galen's treatise on Simples. From book VI onwards (the "catalogue" part of the treatise), such translations are regularly added in the margins, I guess to assist the reader in finding the relevant entry. (2) I am curious about the first text you mention, because it is similar in composition and purpose to the Greek pseudo-Galenic text Introductio sive medicus (the long chapter 13 especially) that I edited for my PhD.

Tzvi Langermann
Thank you, Caroline, for both comments. Nothing is really available on the Mughni; I haven't looked at Ullmann (the German, not the English), which would probably be the best place to look. I am sorry to say that I have not seen your thesis; it would be nice to see how the texts compare.

The forum is, as Monica Green of Princeton's Institute for Advanced Study wrote, “a model of scholarly exchange”—proving the generative potential of intellectual modesty and honesty, attributable both to Langermann and to the capacious imperatives of object-driven research. It is a mandate for us to nurture and cultivate this sort of learning and production of knowledge. Between the material riches of our remarkable libraries, and the human capital and networks fostered and supported by the Katz Center, there is only good to come.