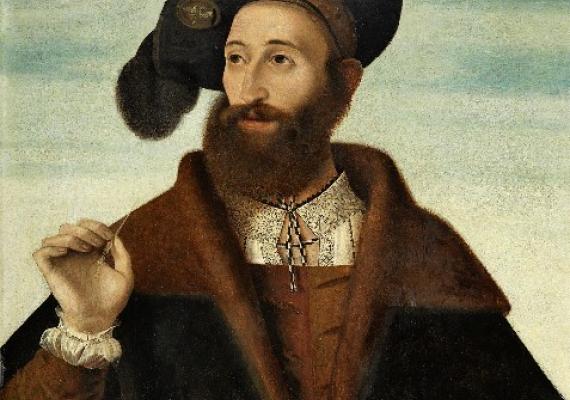 When Fabrizio Lelli introduced this sixteenth-century painting (shown left) "Portrait of a Man," by Bartolomeo Veneto to the audience at a lecture this month, he read it for hints as to its subject. Through close attention to the strange ornament in the unnamed man’s hand—a delicate gold pin with small golden hand on its end—Lelli suggested that portrait’s well-to-do subject may have been Jewish. The form of the ornament resembles a “yad” (lit: “hand”), an implement used to guide the reading of the Torah in synagogues, and its presence may also tell us of the man’s trade: was he perhaps involved in the gold jewelry trade, a trade heavily populated by Jews?

This was one fleeting insight among the many that made up a talk attempting to uncover and understand the place of Jews in the Italian Renaissance. To show how Renaissance Jews attempted to portray themselves within the culture of their day, Lelli’s central case study was a rare manuscript held by the Schoenberg Institute for Manuscript Studies (SIMS), as part of his 2019–20 SIMS–Katz Distinguished Fellowship in Hebrew Manuscript Studies. 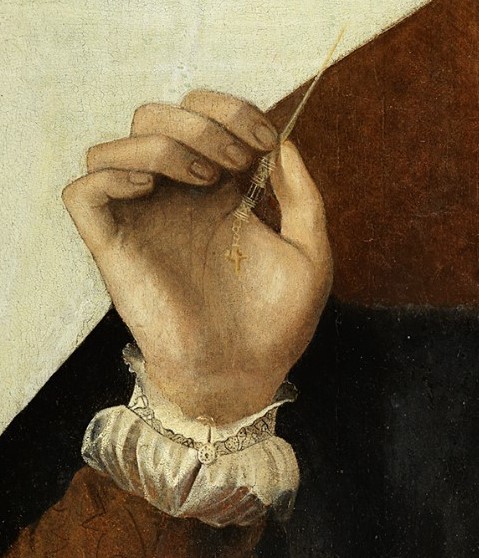 The manuscript is a copy of Iggeret orhot ‘olam, the first modern Hebrew work on geography. Penned by the Italian Abraham ben Mordechai Farissol (c. 1451–ca. 1525), the work reveals how one learned Jew attempted to knit the explosion of knowledge occasioned by global exploration and the circulation of ideas using print technologies with what he saw to be the capacious knowledge of the world to be found in the Bible. New science, for him, was not something completely modern, but something to be discovered—as much in Scripture as in the New World, a terra incognita mentioned for the first time in Hebrew in this document.

The lecture was introduced by David Ruderman, the Joseph Meyerhoff Professor of Modern Jewish History at Penn and the Katz Center’s founding director. An endowment in his name funds this initiative. This introduction was special: Ruderman has not only been a friend and mentor to Lelli for decades, but also wrote his first book on Farissol nearly 40 years ago. The world is round indeed.

Lelli is the fifth SIMS-Katz Distinguished Fellow, in a program that pairs a scholar of international renown with one of the rare manuscripts in Penn’s libraries. He worked remotely on the digital manuscript before coming to Penn for ten days this fall for hands-on engagement with the text. While he was here he delivered this lecture and also filmed a MOOC, or Massive Open Online Course, which will launch on edX.org in the spring.

This lecture was cosponsored by the Jewish Studies Program at the University of Pennsylvania.