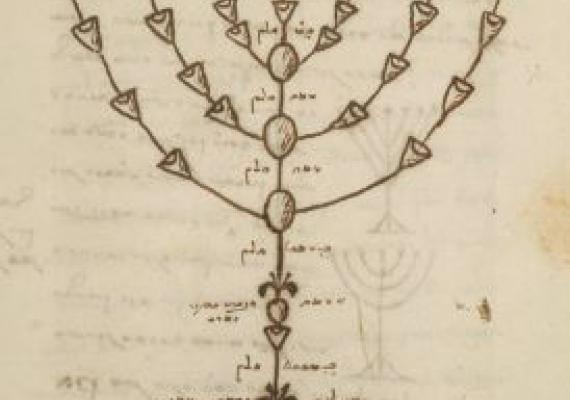 The Katz Center and the Schoenberg Institute for Manuscript Studies (SIMS) announce the June 5 launch of a video mini-course exploring a fascinating 17th-century manuscript. It is taught by the 2017–18 SIMS-Katz Distinguished Fellow in Jewish Manuscript Studies, Alessandro Guetta (Institut national des langues et civilisations orientales, Paris), and is called:

The Tabernacle in Word & Image: An Italian Jewish Manuscript Revealed

In it Professor Guetta introduces Malkiel Ashkenazi’s Tavnit ha-mishkan and Hanukat ha-bayit (CAJS Rar Ms 460), a detailed commentary on the construction and implements of the biblical Tabernacle. Through this look at one man’s production of a heavily illustrated exploration of Jews’ own lost architectural past, Guetta discusses how Jews in Renaissance Italy found ways to both participate in the revolution in Italian architecture and recover suppressed talmudic traditions.

This is the second in a growing series of SIMS-Katz MOOCs that pair an internationally-known scholar with one of the manuscripts in Penn’s library holdings. Each course dives deeply into the manuscript itself, but the MOOCs are bound together by the many ways that historians can learn from manuscripts as manuscripts. What do the unique material aspects of a given manuscript have to say that is not available through a printed version of the same? Marginal notes, bindings, scratch outs, handwriting styles, inks, and materials—all offer a wealth of information to those who know how to read them.

Free and available to anyone with an internet connection and email, the MOOC (massive open online course) is produced by SAS Online learning, and hosted through edX.org.

Others in the series:

Manuscript: A fifteenth-century Sicilian medical miscellany (UPenn MS Codex 1649)
Learn about the circulation of thirteenth-century medicine by reading the wide variety of clues left in this amazing manuscript.

In production & on the horizon:

Manuscript: A variety of Geniza fragments from Penn’s collection
No one makes deciphering handwriting more riveting than Professor Olszowy-Schlanger, who consulted with Parisian police handwriting experts to hone her craft. It should be ready in the late fall of 2018. Stay tuned for this masterclass in Hebrew paleography.