Laws on Walls between the Rabbis and Rome 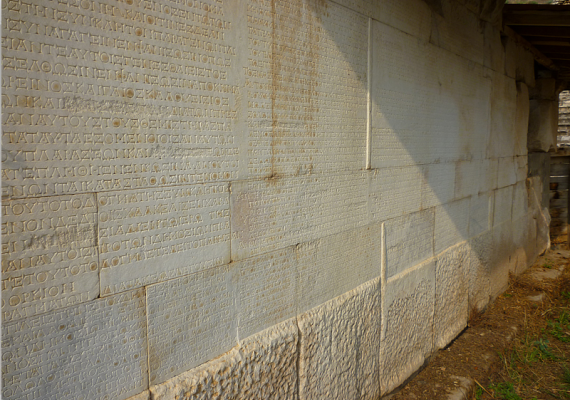 The Roman Empire left many things to the West, from marble columns to an ineffectual Senate, the names of days and months, and a certain martial ideal of masculinity. Perhaps the most important imperial export, and one of pointed import for the birth of Judaism, was the law. Roman law was a marvel, and Rome was committed to both the fact and the idea of legal justice as a central component of their successful ruling strategy. But in a world lit only by fire, how did people get their laws? And how did the first rabbis, who were busily creating an alternative nomos, digest the Roman laws that surrounded them?

There were many conduits of law to the Jews in the Eastern provinces, including Roman court proceedings, which were held in plein air and were popular spectacles; accessible public archives; and martyr stories and other literary forms. (On this see Saul Lieberman’s seminal “Roman Legal Institutions in Early Rabbinics and in the Acta Martyrum” JQR 35.1 [1944]—one of his most important English essays.)

Perhaps most significant was that fact that the rabbis lived in cities in which Roman power was very literally inscribed on the walls all around them. Roman law, like biblical law, makes a point of legislating the particulars of its own dissemination. Second-century Roman jurist Ulpian emphasizes the importance of the public’s apprehension of the imperial legal will:

By “public notice” we mean one written in clear letters, posted in such a way that it may be read properly from ground level, in front of an inn, for example, or in front of a place of business—not in a hidden place, but in the open (non in loco remoto, sed in evidenti). Should it be written in Greek, or in Latin? I think that depends on the location, lest someone be able to plead ignorance of the letters. (Digest 14.3.11.3)

Jews were exposed thus to Roman enactments no less than other provincials. Indeed the rabbis are bothered by the competition posed by Roman law, and grouse about the enthusiastic attention and reverence the posting of imperial edicts caused among Jews (cf. Sifre Deuteronomy §33; Sifra, Aharei Mot 9.13; Leviticus Rabbah, 27.6; Esther Rabbah, proem 11; and see Tropper in JQR 95.2 [2005]).

These public laws communicated more than a set of do’s and don’ts, they materialized the government’s authority in a range of registers. Cities, for example, displayed civic even outdated laws on walls as a way of recounting their own idealized histories, as we see in the archive wall on the north parados in the theater of Aphrodisias (pictured here). Posted laws thus took on cultural functions and meanings beyond local regulation (cf. Rajak’s 1984 reading of Josephus’s catalogs of Roman laws concerning Jews in this vein).

Katell Berthelot’s essay “The Roman Context of Some Rabbinic Traditions Pertaining to the Revelation of the Torah in Different Languages” in the latest issue of JQR (108.4), looks at a midrashic complex that arises, she argues, precisely at this cultural nexus. The rabbis develop a well-known notion that the law at Sinai was communicated in all the languages of the world. This tradition serves a range of functions in the midrashic corpus, and is often read as a species of rabbinic universalism. Using the law of Ulpian (quoted above) and other sources as evidence, Berthelot suggests a new reading: she ties the tradition to the Deuteronomic scenes of the publication of the Torah on stone (Dt 27.2–8, Josh 8.30–35 and 4.1–10). Together the two motifs suggest their mirroring of Roman practice, and make best sense when seen as a satirical inversion of the Roman legal world surrounding them.

Why, according to Ulpian, ought Roman edicts be made public in Greek and Latin? So their subjects cannot claim ignorance of them. Taking a page from Rome’s own legal playbook, and trumping it, says the midrash, God demands and justifies his (eventual) punishment of the nations by publishing his own Torah inscribed on stones—in clear sight of the nations and in every human language. There is no excuse for their obduracy now.

In this essay, then, Berthelot sets the rabbis firmly in a Roman world and sees imperial law as a contact zone catalyzing rabbinic creativity and galvanizing literary action and reaction. Berthelot engages other scholarly interpretations of the publication of the law, and her work is part of a rich vein of current scholarly exploration into the impact of Roman law on rabbinic culture during the high empire. Some of the best of this work appears in JQR. Keep your eyes open for forthcoming essays from scholars such as Yakir Paz, Orit Malka, and Yair Furstenberg, among others.