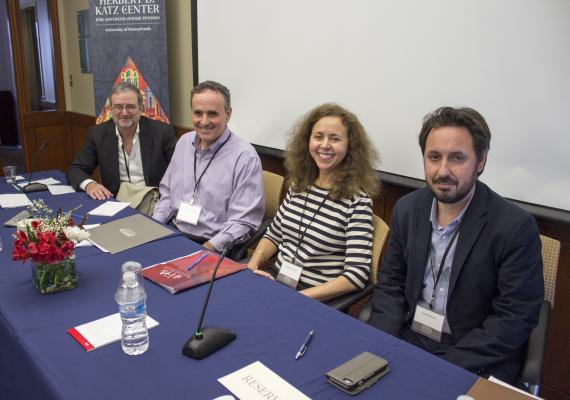 Six of this fall’s fellows conceived the program for a day-long symposium on December 12, 2018, called “Jews in Muslim Contexts: Spatial Approaches.”

Departing from the traditional conference format, the group was committed to making a day of engagement and conversation. Instead of papers, each session was structured instead as a conversation animated by provocations and questions set by the organizers, who sought to open new avenues into the study of Jews in Muslim-majority contexts that did not rely on lazy binaries or slip into well-trodden analytical paths. Speakers were asked to respond with cases from their research that illuminated some new facet of questions posed.

Historians, anthropologists, and literary and film scholars, as well as a working photographer, participated in the day. The panels took advantage of the breadth of evidence studied by the fellows in residence, amplified by voices invited from outside, their remarks tied together by concentric notions of space.

In conjunction with the colloquium, Laurence Salzmann, a chronicler of, among other things, the Jewish populations of Turkey, also exhibited a series of photographs from his work documenting Jewish life in vanishing worlds.

The day as a whole interrogated the complex opportunities, influences, and obstructions posed by a range of spatial contexts, among them, as the planners described them, “cities, homelands, states and empires; from the clatter of a coffeehouse to the policies of empire, and ultimately…the imagined place of self and community.”